School is finally out and that could mean two things for us; one, we could sit on the couch staring at a TV, or two, we could curl up in a hammock engrossed in a new book that has completely captured our imaginations.  I am a avid reader, but sometimes I find it hard to discover the next great adventure to stick my nose in. I have put together a list of my top ten books that I believe every 12-14 year old should read. At the top of that list is Gregor the Overlander by Suzanne Collins. Note, I am a big fantasy person so the books series I included are not for the faint of heart. If you are one who likes to enter a crazy world, these are the ones for you.

The same author who wrote the critically acclaimed Hunger Games also wrote a series for younger teens and tweens about a young boy who discovers a whole world under New York City where the dangers include giant rats and unforgiving prophecies.

Gregor is your average eleven year old living in an apartment in New York City. He runs track, plays the saxophone. He’s normal, but he does have one secret. Two years ago his dad disappeared without a trace and he just wasn’t the type to leave. On a hot summer day, Gregor and his two year old sister, Boots, head down to the laundry room. Lost in his thoughts, Gregor doesn’t notice that his sister has vanished…Until he finds her falling through a gate to an old air duct. Gregor doesn’t hesitate and jumps in after her. Immediately, he is plunged into a strange, dark world where peculiar looking humans ride bats and slay giant rats with swords. All he wants is to leave and get his sister to safety when he learns of The Prophecy of Gray, a prophecy that leads back to his dad.

I’d probably go as far as to say I’ve read hundreds of books over the course of my thirteen years, but Gregor the Overlander really sticks out. It’s the start of a wild, five-part series. These books are clean joy-rides, each packed full of wild twists and turns. I’ve already read it twice and I don’t waste time rereading unless I fell in love with the story the first time around. The characters are fleshed out and real, making the story that much more enjoyable. My only complaint about this book is that it ends.

When Gregor falls through a grate in the laundry room of his apartment building, he hurtles into the dark Underland, where spiders, rats, cockroaches coexist uneasily with humans. This world is on the brink of war, and Gregor’s arrival is no accident. A prophecy foretells that Gregor has a role to play in the Underland’s uncertain future. Gregor wants no part of it — until he realizes it’s the only way to solve the mystery of his father’s disappearance. Reluctantly, Gregor embarks on a dangerous adventure that will change both him and the Underland forever.

This unforgettable novel by Suzanne Collins, the international bestselling author of the Hunger Games series, is rich in suspense and brimming with adventure.

Thinking one day about Alice in Wonderland, author Suzanne Collins was struck by how rural the setting must seem to kids who, like her own, lived in the city. In New York City, you’re much more likely to fall down a manhole than a rabbit hole and, if you do, you’re not going to find a tea party. What you might find…? Collins’s musings led to the creation of The Underland Chronicles. “I liked the fact that this world was teeming under New York City and nobody was aware of it. That you could be going along preoccupied with your own problems and then whoosh! You take a wrong turn in your laundry room and suddenly a giant cockroach is right in your face. No magic, no space or time travel, there’s just a ticket to another world behind your clothes dryer,” Collins says.

Gregor the Overlander is squeaky clean. You won’t find profanity in this series and although there is a romance, it is light and innocent.  Just note that this is about battle in a world below ours, so there is violence but descriptions are in a way that you have a clear idea of what is going on, but are not repulsed or overly grossed out.

Have you read this book? What did you think? I’d love to hear your thoughts!

Looking for more book ideas for summer reading? Check out this list of favorite books for middle school students. 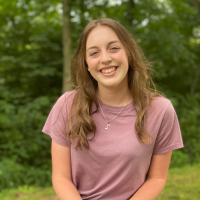 Natalie Williams is a teen writer and proud Kentuckian. Her favorite hobbies involve anything to do with music and books. From singing, playing piano, or reading the latest novel by her favorite author, Natalie loves it all. You will usually find Natalie with her nose in a book or filling a pad of paper with her thoughts for a new story.

Exploring Pueblo ruins in Arizona! What a fun summ

This weekend on the agenda... my next adventure wi

Always learning something new! This weekend I made

Just about the last haul of the garden season! Hop